With a continuous presence in Egypt since 1975, Citi has been actively involved in major local financings and has facilitated key capital market transactions on behalf of institutional clients. In addition, the bank serves multinationals and global investor clients active in the Egyptian market, and fully supports their banking, investment and credit requirements. In addition, Citi has been an active player in the local Egyptian community with a particular interest in supporting financial literacy, education, microfinance and community development with more than US$500,000 grants extended in the past few years to NGOs such as Injaz Al-Arab and AMIDEAST. 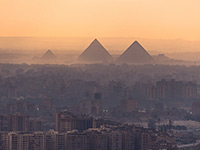