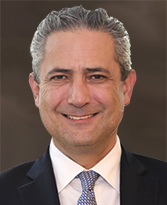 Ernesto Torres Cantú is CEO of Citi Latin America, responsible for all businesses in the 22 countries where Citi is present in the region. Ernesto is a member of Citi’s Executive Management Team.

Ernesto joined Citibanamex in 1989 as a Corporate Banker.

Born in Torreón, México, Ernesto holds a degree in industrial engineering from the Instituto Tecnológico y de Estudios Superiores de Monterrey, and an M.B.A. from Georgia State University in Atlanta. He serves as Chairman of the Board of Tecnológico de Monterrey, Mexico City.