Please be advised that this site is not optimized for use with Microsoft Internet Explorer 6.
For Immediate Release
Citigroup Inc. (NYSE: C)
July 14, 2021 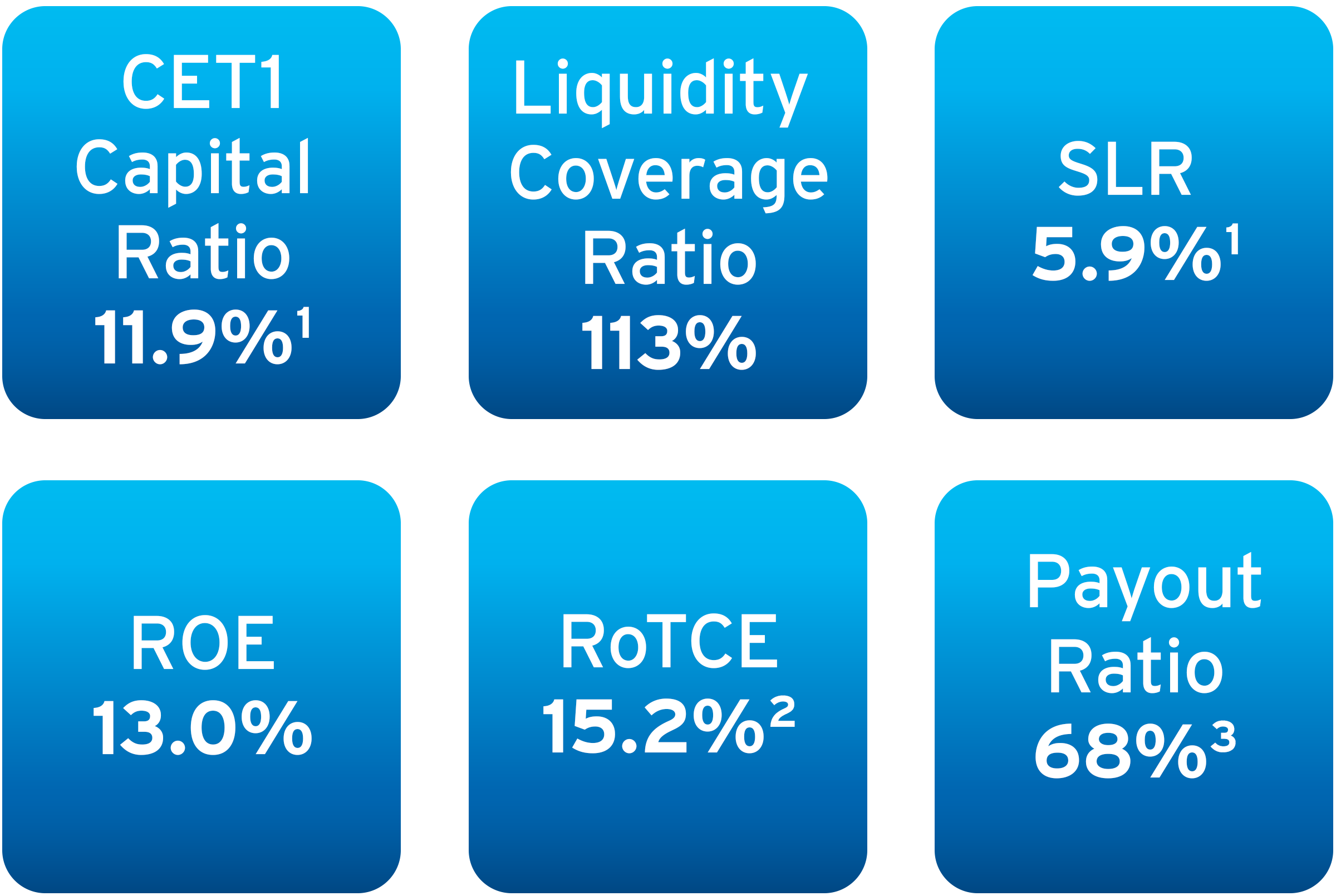 Jane Fraser, Citi CEO, said, “The pace of the global recovery is exceeding earlier expectations and with it, consumer and corporate confidence is rising. We saw this across our businesses, as reflected in our performance in Investment Banking and Equities as well as markedly increased spending on our credit cards. While we have to be mindful of the unevenness in the recovery globally, we are optimistic about the momentum ahead.

“During the first half of the year, we returned nearly $7 billion in capital to our shareholders, the most that was permitted by the Federal Reserve. We ended the quarter with a Common Equity Tier One ratio of 11.9% and we intend to continue to return our excess capital, over and above the amount we need to make strategic investments. We are making progress on our strategy refresh across our consumer and institutional businesses. Our overarching goal is to increase the returns we generate and close the gap with our peers. We have set out to modernize our bank and want to achieve nothing less than excellence in our risk and control environment, our operations and our service to clients,” Fraser concluded. 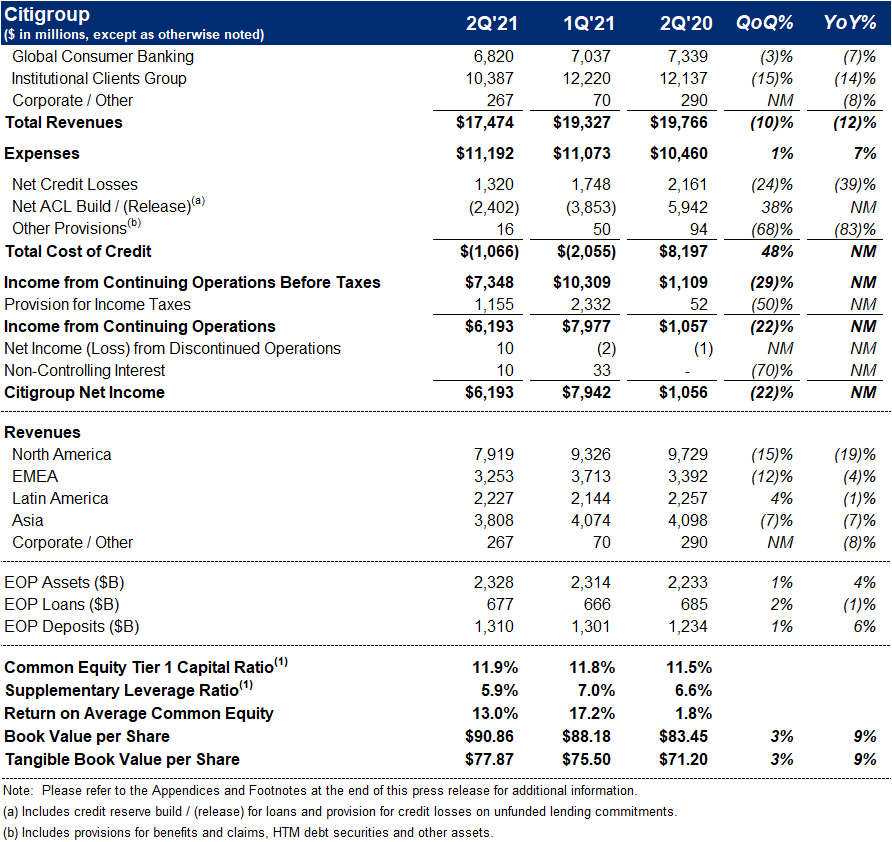 Citigroup operating expenses of $11.2 billion in the second quarter 2021 increased 7% on a reported basis. Excluding the impact of foreign exchange translation5, expenses increased 4%, reflecting a normalization relative to a low comparison in the prior-year period, along with continued investments in Citi’s transformation, as well as other strategic investments, partially offset by productivity savings.

Citigroup net income of $6.2 billion in the second quarter 2021 compared to $1.1 billion in the prior-year period, driven by lower cost of credit. Citigroup’s effective tax rate was 16% in the current quarter compared to 5% in the second quarter 2020. The current quarter tax rate reflects certain tax benefit items related to non-U.S. operations. The prior-year period reflected a higher relative impact of tax advantaged investments and other tax benefit items on a lower level of pre-tax income.

Citigroup's end-of-period loans were $677 billion as of quarter end, down 1% from the prior-year period on a reported basis and 3% in constant dollars, driven by declines across GCB and ICG, reflecting higher repayment rates.

Citigroup's end-of-period deposits were $1.3 trillion as of quarter end, an increase of 6% on a reported basis and 4% in constant dollars, driven by an 11% increase in GCB and a 3% increase in ICG.

Citigroup's book value per share of $90.86 and tangible book value per share of $77.87 each increased 9%, largely driven by net income. At quarter end, Citigroup’s CET1 Capital ratio was 11.9%, an increase from the prior quarter. Citigroup’s SLR for the second quarter 2021 was 5.9%, a decrease from the prior quarter, largely driven by the expiration of the temporary SLR relief. During the quarter, Citigroup repurchased 40 million common shares and returned a total of $4.1 billion to common shareholders in the form of common share repurchases and dividends. 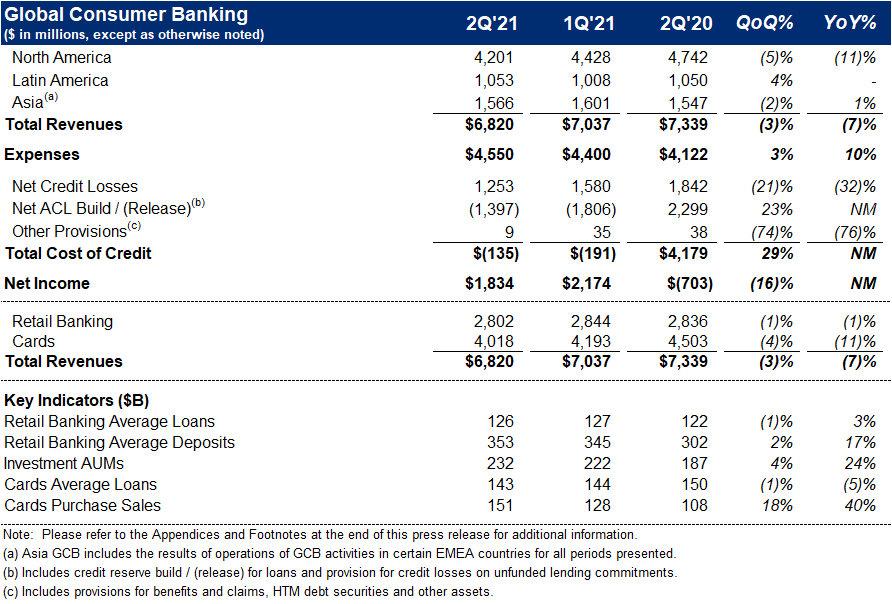 GCB revenues of $6.8 billion decreased 7% on a reported basis and 10% in constant dollars, as continued strong deposit growth and momentum in investment management were more than offset by lower average card loans and deposits spreads across all three regions.

Latin America GCB revenues of $1.1 billion were unchanged on a reported basis and decreased 11% in constant dollars, driven by lower loan volumes and lower deposit spreads, partially offset by growth in assets under management.

Asia GCB revenues of $1.6 billion increased 1% on a reported basis and declined 3% in constant dollars, as strong investment revenues were more than offset by lower deposit spreads.

GCB operating expenses of $4.6 billion increased 10% on a reported basis and 7% in constant dollars, reflecting continued investments in Citi’s transformation, as well as other strategic investments, an acceleration in acquisition marketing and higher volume-related costs, partially offset by efficiency savings.

GCB cost of credit of $(135) million decreased significantly, driven by a net ACL release of $1.4 billion compared to a build in the prior-year period, reflecting improvements in both portfolio credit quality and the macroeconomic outlook, as well as lower net credit losses.

GCB net income of $1.8 billion increased significantly, as the lower cost of credit more than offset the decline in revenues and higher expenses. 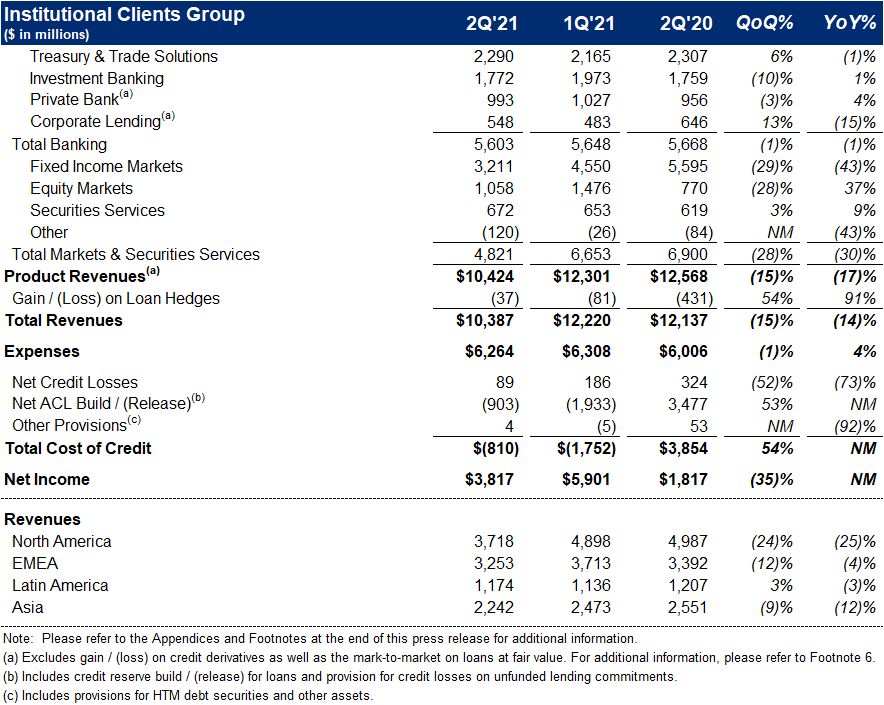 ICG operating expenses of $6.3 billion increased 4% on a reported basis and 2% in constant dollars, primarily driven by continued investments in Citi’s transformation, along with other strategic investments, partially offset by lower incentive compensation and efficiency savings.

ICG cost of credit included net credit losses of $89 million, compared to $324 million in the prior-year period, and a net ACL release of $903 million compared to a build of $3.5 billion in the prior-year period. The net ACL release in the current quarter primarily reflected improvements in portfolio credit quality, as well as the continued improvement in the macroeconomic outlook.

ICG net income of $3.8 billion increased significantly, as the lower cost of credit more than offset the decline in revenues and higher expenses.

Corporate / Other revenues of $267 million declined 8%, but were largely unchanged on a dollar basis versus the prior-year period, as episodic gains in the quarter, were more than offset by previously disclosed one-time items in the prior year-period.

Corporate / Other expenses of $378 million were up 14%, but were largely unchanged on a dollar basis versus the prior-year period, primarily driven by the impact of foreign exchange translation.

More ways to get Citi News

Get the app for Android

Get the app for iOS

Citi
Citi, the leading global bank, has approximately 200 million customer accounts and does business in more than 160 countries and jurisdictions. Citi provides consumers, corporations, governments and institutions with a broad range of financial products and services, including consumer banking and credit, corporate and investment banking, securities brokerage, transaction services, and wealth management.

Certain statements in this release are “forward-looking statements” within the meaning of the rules and regulations of the U.S. Securities and Exchange Commission (SEC). These statements are based on management’s current expectations and are subject to uncertainty and changes in circumstances. These statements are not guarantees of future results or occurrences. Actual results and capital and other financial condition may differ materially from those included in these statements due to a variety of factors. These factors include, among others, macroeconomic and other challenges and uncertainties related to the COVID-19 pandemic, such as the duration and severity of the impact on public health, the U.S. and global economies, financial markets and consumer and corporate customers and clients, including economic activity and employment, as well as the various actions taken in response by governments, central banks and others, including Citi, and the precautionary statements included in this release. These factors also consist of those contained in Citigroup’s filings with the SEC, including without limitation the “Risk Factors” section of Citigroup’s 2020 Form 10-K. Any forward-looking statements made by or on behalf of Citigroup speak only as to the date they are made, and Citi does not undertake to update forward-looking statements to reflect the impact of circumstances or events that arise after the date the forward-looking statements were made. 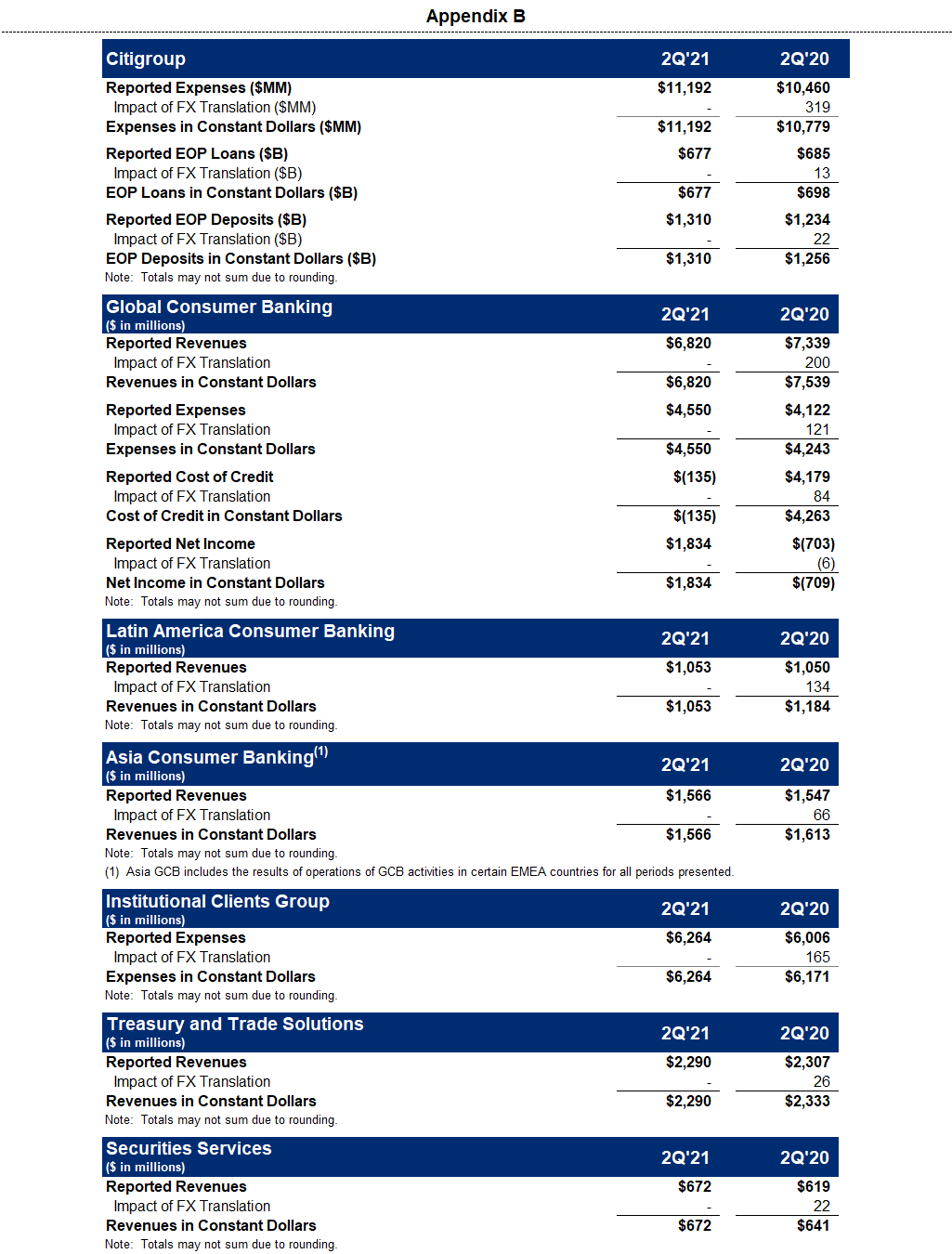 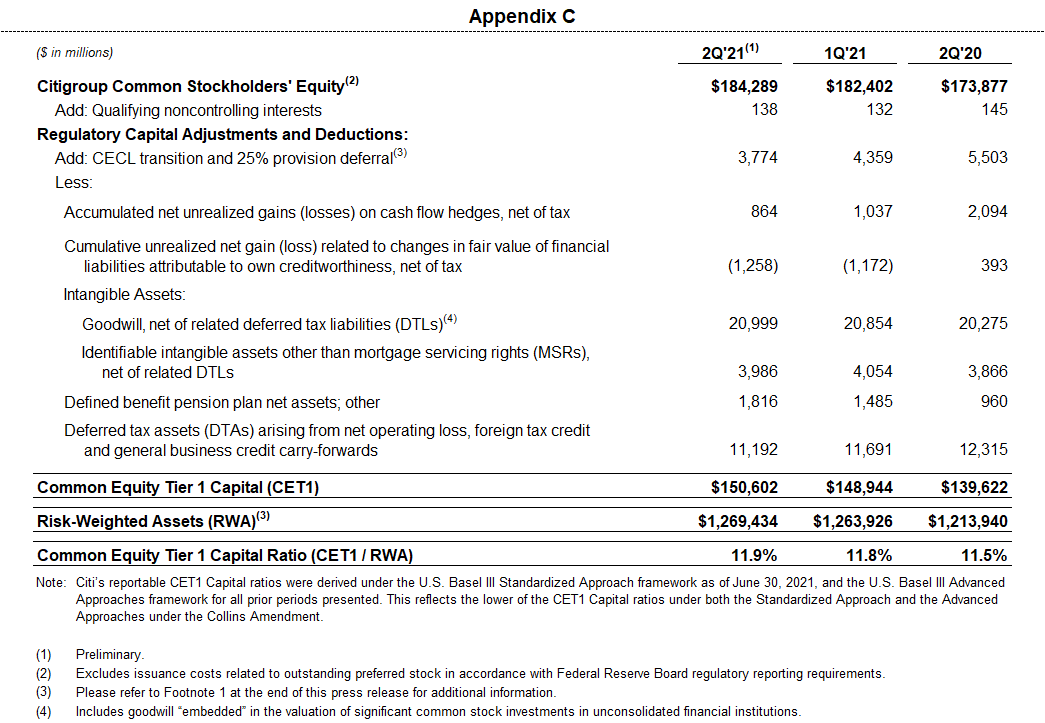 1 Ratios as of June 30, 2021 are preliminary. Commencing January 1, 2020, Citigroup’s Common Equity Tier 1 (CET1) Capital ratio and Supplementary Leverage ratio (SLR) reflect certain deferrals based on the modified regulatory capital transition provision related to the Current Expected Credit Losses (CECL) standard. Excluding the deferrals based on the modified CECL transition provision, Citigroup’s CET1 Capital ratio and SLR as of June 30, 2021 would be 11.6% and 5.7%, respectively, on a fully reflected basis. For additional information, please refer to the “Capital Resources” section of Citigroup’s 2020 Form 10-K.

3 Citigroup’s payout ratio is the sum of common dividends and common share repurchases divided by net income available to common shareholders. For the components of the calculation, see Appendix A.

4 Citigroup’s tangible book value per share is a non-GAAP financial measure. For a reconciliation of this measure to reported results, see Appendix E.

5 Results of operations excluding the impact of foreign exchange translation (constant dollar basis) are non-GAAP financial measures. For a reconciliation of these measures to reported results, see Appendix B.